Slippers are integrated into the mat, allowing you to walk comfortably and without slipping on dirty or wet floors. At the same time, Mat walk can be seen as a new way of wiping the bathroom floor. 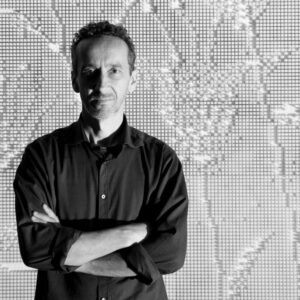 Paolo Ulian lives and works in Massa-Carrara in Italy, where he was born in 1961. After graduating from the Academy of Fine Arts of Carrara, he studied industrial design at the Institute of Industrial Arts in Florence. At the end of 1990 he began working as an assistant at the Enzo Mari Studio in Milan until 1992 and then returned to Tuscany where he opened his studio together with his brother Giuseppe.

Paolo has presented his work in numerous exhibitions around the world and collaborates with companies such as Driade, View, Sensi&C., Fontana Arte, Luminara and BBB. His work is characterised by a special attention to environmental issues and discovering new meanings in everyday objects.